Aber cottage is in Snowdonia immediately south of the bridge at Pont Aberglaslyn and the Aberglaslyn Pass. Parts of the house date back to around 1750. This is represented by the chimney side of the kitchen wall, which extends up forming part of the main bedroom wall. As depicted in the painting by Benjamin Williams Leader, a house existed up to the end of the 19th Century. However it seems that the place was largely neglected during the first part of the 20th Century and by the middle of the 20th Century, it became completely derelict with only a ruin left.

One of the guests at Aber Cottage wrote to the previous owners as she had family connections with the place. A relative of hers, a Dr Olwen Williams (an American academic), was considering buying it many years ago in the 60s when she retired back to England. This is because her late father, the Rev. Tom Williams, who emigrated to the States in the late 19th Century, spoke fondly of it and remembered being taken there as a child by his father where he spent an idyllic childhood. He was a member of a family of a miners working in the area. It is thought that the cottage was rented rather than owned by the Williams's. The building has been extended but apparently 5 boys grew up there in the 1850s in a tiny cottage with no mains water. 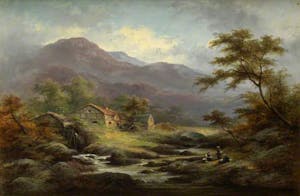 Left: A painting of the original Cottage and the Bridge at Pont Aberglaslyn c1890 by Benjamin Williams Leader, a Yorkshire painter, which is currently exhibited at the National Library of Wales

When the American academic came to see it in the 60s, she looked at what was then a very run down cottage with happy memories. The lady who wrote apparently came as a child with the American relative and they were able to locate the cottage from drawings their father had made.

The place was bought in the 80s by a local business man who renovated and extended the cottage retaining some old parts like the chimney wall in the kitchen and main bedroom. He also built the garage, retreat and extended/ raised the grounds. An award was given at the time for the design (hence the plaque by the kitchen entrance). This man then sold the place to a couple who used it as B&B for 3 years in the late 80s who sold it in 1990.

Since this time a lot of work has been done to update Aber Cottage in all its parts. The original bathrooms and kitchen have been replaced; the central heating was converted from wood burning to oil, mains water installed and the gardens landscaped. The conservatory has been recently replaced and a new floor to follow soon. Work has been competed to maintain the river edge by the blue pool, which has been affected over time by the speed of flow and rising water level. The work was carried out with particular care in order to retain the natural beauty of the place and preserve the environment with the least possible disturbance to fish and rare insects known to inhabit this spot.

We took ownership earlier this year and have already done a lot of work on the 'Retreat' fitting new central heating, a new fireplace as well as new furniture and a complete redecoration. We plan to do more work at the end of this season on the main cottage and look forward to posting the pictures on the web site when the work has been completed.