Surrounded by trees and with the Aberglaslyn River flowing gently through the garden, Aber Cottage is a place of great natural beauty and tranquillity. The cottage began life in the mid eighteenth century, and its character and location have inspired artists to pick up their brushes. A painting of the cottage in eighteen ninety is exhibited in the National Library of Wales.

Sadly, the cottage fell into ruin, but was rescued in the nineteen eighties by a local businessman who won an award for the superb restoration. He renovated and extended, retaining the original chimney wall in the kitchen and bedroom. Today it is a charming home where you can enjoy the comforts of the modern age in a unique setting. There are enchanting views to the river from every room, and it provides a picturesque backdrop to meals in the conservatory or on the patio. The cottage has a calm and pleasing atmosphere. It encourages you to settle in the lounge to read and relax, and the multi fuel stove creates a warming glow on a chilly winters' day.

The extensive gardens, which front directly on to the Aberglaslyn River (Afon Glaslyn) are the jewel in the crown of this superb property. The lawn and flower beds blend into the grassy bank of the river walk, to the bridge. The garden is a paradise for ramblers, artists and bird watchers. A favourite spot is to sit by The Blue Pool (Llyn Glas), where the copper content turns the water to a vivid blue. The river and the pool provide an outstanding and tranquil setting.

Beddgelert is a pretty, friendly village and is an excellent base for exploring both Snowdonia National Park.  It is also only a short drive from the coast with numerous beaches and castles to explore.

History Of The Surrounding Area

The Cottage and its grounds are part of the Parish of Nantmor. The grounds extend to nearly 3 Acres up to the bridge and theoretically to half the width of the Glaslyn River (Afon Glaslyn). While not of great significance in terms of its length (about 16 miles (26 km)), this river is one of Gwynedd's primary rivers, and has greatly influenced the landscape in which it flows.

It has its source in Glaslyn, a Cirque lake on the flanks of Snowdon. It is joined by Nant Traswnant which drains Pen-y-Pass and by Nant Cynnyd before entering the beautiful lake, Llyn Gwynant. The river then flows through Llyn Dinas before entering the village of Beddgelert. In the middle of the village it is joined by the substantial tributary, the Afon Colwyn which drains the south western flank of Snowdon. The much enlarged river flows down past Gelert's grave before tumbling down into the Pass of Aberglaslyn. This is a small rocky gorge close to the main road which provides easy public access to a most picturesque piece ofSnowdonian scenery. The river runs between the A 498 between Beddgelert and Porthmadog and the recently re-opened Welsh Highland Railway.

The river emerges from the gorge into the relatively flat agricultural land of Tremadog and Porthmadog. This wide flat valley – now called Traeth Mawr – was once the estuary of the Glaslyn before the Porthmadog Cob was created. This sealed off the mouth of the estuary enabling the land to be reclaimed. Once the river has crossed under the railway line, it meanders in large pools and marshes before eventually passing through the tidal sluices on the Cob at the south-eastern end of the town of Porthmadog, and from there into Tremadog Bay. Further south, the River Dwyryd also drains into Tremadog Bay.

The first pair of breeding ospreys in Wales nest at Pont Croesor about 4 miles (6.4 km) upstream from Porthmadog where the RSPB have set up observation facilities. They first bred in 2005 and have returned every year since.

Fishing on the Glaslyn up to Beddgelert is controlled by the Glaslyn Angling Association. The season for fishing the Glaslyn is March to October (dates vary)

Visitors to Beddgelert usually wish to see Pont Aberglaslyn (regarded as one of the seven wonders of Wales) or to angle in the river, which here abounds with salmon and trout. The name of this place signifies, in Welsh, the " Bridge of the Blue Pool;" but it is more usually called the Devil's Bridge (please see below). The blue pool is in actual fact the pool at the end of the Aber Cottage garden and the reason for the blue colour is the abundance of copper in the soil.

The story regarding the devil connection is very similar to other Devil and bridge related stories found throughout the British Isles. The Devil is said to have built the bridge on the understanding that he would receive the soul of the first living creature to cross over it. When the bridge was finished he went to the local inn to inform the magician Robin Ddu that it was ready. Robin went to inspect the new bridge with a dog he lured from the pub with a fresh baked loaf of bread. Upon seeing the bridge Robin asked the Devil whether it was sturdy and how much weight it could carry as he thought it might not even take the weight of the loaf he was carrying. 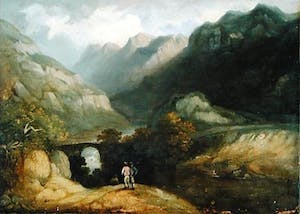 The Devil was shocked and demanded that the magician throw his loaf onto the bridge to prove that it was indeed strong enough. So Robin threw the loaf and the dog chased it across the bridge, thus cheating the Devil of a human soul. Robin Ddu then returned to the pub to finish his drinking.

In another version of this tale it is a local hotelier who asks Robin to aid him in constructing a bridge and as payment Robin was to take the soul of the first living person that crossed it.

Robin Ddu or Black Robin the Magician, or more correctly Robin Ddu ap Siencyn Bledrydd of Anglesey, lived circa 1450. He was a poet and sometimes known as a prophetic poet. Approximately ninety of his poems are still preserved on manuscripts. It would appear that Robin also pretended to be a sorcerer or wizard and he appears in many Welsh tales. The fact that the area is famous for fishing is depicted in the painting titled  ”The Salmon Fishery At Pont Aberglaslyn, North Wales" oil on Canvas by Julius Caesar Ibbetson in 1809. Reverand Evans is not alone in his admiration for the area for there are many paintings, postcards and photographs taken of this part of Wale’s. On area maps it is described as a point of exceptional natural beauty and is a protected zone. Many of the paintings can be seen in the National Museum of Wales or in major National Galleries. Many artists and photographers to date continue to be enchanted and inspired by the landscape.